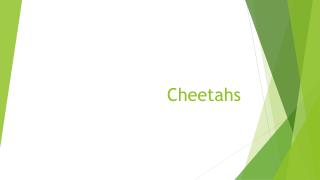 Cheetahs. Cheetah facts. The cheetah is the fastest land mammal on the planet, reaching speeds of up to 87 kilometres per hour . Cheetahs mainly hunt during the day to avoid competition with larger predators such as hyenas and lions which usually hunt at night. Cheetahs speed limit. Cheetahs - . by:swinton carter. cheetahs. written and illustrated by : taylor morrison. there are a lot of amazing things

Cheetahs - . by: jasmine snead environmental science. about cheetahs. cheetahs are the fastest land animal in the world

Cheetahs !!! - . by michelle animwah. what in the world do cheetahs eat ?. the main thing cheetahs eat is meat. for

Cheetahs - . by: jaime h. body. this is a diagram of a cheetahs body. enemies. some of cheetahs enemies are lions,

Cheetahs - Keegan's project. cheetahs. what do cheetah's eat?. cheetah’s are carnivores. they eat other animals like

cheetahs - . we must help……. fun facts. the cheetah is the worlds fastest land mammal and they can reach up to 70mph.

CHEETAHS - . by jason cassandra. animal defenses. the cheetah has sharp teeth for ripping meat and chewing meat. the

Cheetahs - By: david z. . cheetahs. what do they look like?. cheetahs look cool. they are 7 feet long. when they are born

Cheetahs - . by cassandra l isi. habitat. the cheetah is usually found in africa but can sometimes be found in asia.