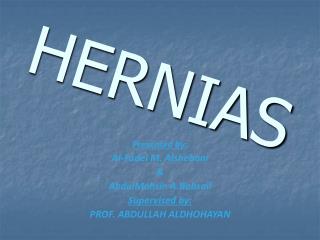 Hernias - . by: yoshua arseneault drew maynard. what is it?. an opening or weakness in the muscular structure of the wall

Hernias - . dr. ibrahim bashayreh rn, phd. what is a hernia. hernia is derived from the latin for

Hiatal Hernias - . in general…. a hiatus hernia is the protrusion of the upper part of the stomach into the thorax

ABDOMINAL HERNIAS - . fadi j. zaben rn msn. definition:. a hernia is a protrusion of an organ, tissue, or structure

Abdominal Wall Hernias - . hernia. definition : a hernia is an abnormal protrusion of a viscus through the wall of a

Inguinal , umbilical , femoral hernias - . the cathedra of the faculty and hospital surgery of the treatment faculty of