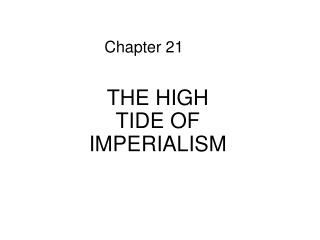 Chapter 21. THE HIGH TIDE OF IMPERIALISM. The Spread of Colonial Rule. Q: What were the causes of the new imperialism of the nineteenth century, and how did it differ from European expansion in earlier periods?. Motives for Colonialism. Economic Raw materials Oil, tin, rubber New markets