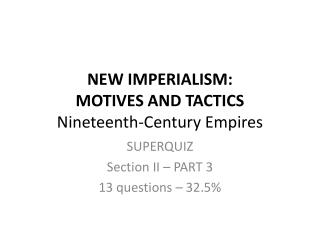 Chapter 21 - . the high tide of imperialism. the spread of colonial rule. q: what were the causes of the new imperialism

Imperialism, Colonialism, and Resistance in the Nineteenth Century - . imperialism in the nineteenth century change and

EXAM ONE - . review question. 1. the first building application of warm air, central heating occurred in which of the

Forms of Imperialism - . forms of imperialism. paternalism – a policy by which europeans governed their colonies in a

Imperialism - . what is imperialism?. imperialism is the practice of forming and maintaining an empire. the “mother

THE LATE EIGHTEENTH AND EARLY NINETEENTH CENTURIES - . to jackson. events leading to the revolutionary war (1750-1776).

A Western-Dominated World - . the new imperialism. european imperialism did not start before the 1800’s. imperialism is

TEST FOUR NOTES - . standard 11. sswh11 students will investigate political and social changes in japan and in china from