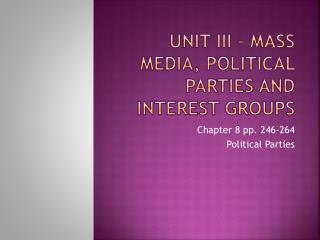 Unit III – Mass Media, Political parties and interest groups. Chapter 8 pp. 246-264 Political Parties. The party in government: promises and policy. Party control does matter because each party and the elected officials who represent it generally try to turn campaign promises into action. PRINCIPLES OF FLIGHT - . definitions. mass :- mass is the quantity of matter in a body density :- density is the mass per

Media Change and Civic Activism: From the Cultural Revolution to the Internet Guobin Yang - July 11, 2013 east-west

Chapter 10- Interest Groups - . (1). define what an interest group is, and contrast its functions with political parties