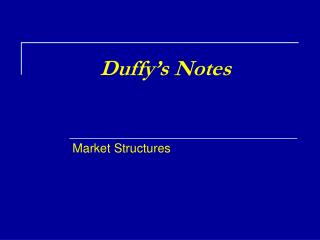 Duffy’s Notes. Market Structures. Theories of Imperfect Competition. Industrial organization is the study of the behavior of imperfectly competitive industries. In this class, we will look at some of the possible organizations. Different Possibilities.

TEST FOUR NOTES - . standard 11. sswh11 students will investigate political and social changes in japan and in china from

Unit 9 Notes - . kingdom animalia. characteristics of animals. all multicellular all are eukaryotes (cells with nucleus

Journalism 112 notes - . journalism is the business or practice of producing and disseminating information about

Salome – Carol Ann Duffy - . never again! i needed to clean up my act, get fitter, cut out the booze and the fags and