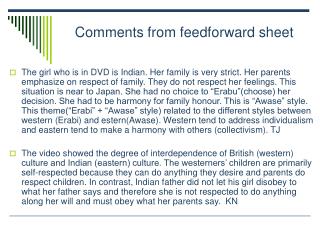 Feedback/ feedforward : a view from the Law School - . dr jane bryan. what did students understand by the term

Comments from the plenary: - Emerging issues during the icstd meeting at nyali beach hotel, mombasa, kenya on 9 th

Comments from Paper #5 - . things i learned from you…. three different positions about sport and the moral life.

Comments from the Scholarship Students

Appendix B: An Example of Back-propagation algorithm - . november 2011. figure 1: an example of a multilayer feed-forward