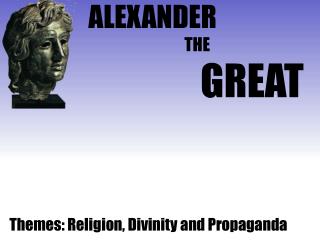 ALEXANDER. THE. GREAT. Themes: Religion, Divinity and Propaganda. Alexander’s Ancestors. Heroes to be honoured Achievers to match… …and to surpass?. The Conquest of Asia Minor. Troy. Granicus River (334BC). Gordium. Miletus. Halicarnassus. Issus (333BC). Tarsus. Alexander - . the so so. born 356 bc dies 323 bc born in macedon, son of king philip ii someone assassinates philip ii

Alexander - . by sam raphael. what is alexander about?. the life story of alexander the great the reflection of alexander

ALEXANDER - . the. great. relationship with macedonians. the policy of

ALEXANDER - . the. great. theme 1: relationship with greeks. the league of corinth. homework tonight use your existing

Alexander Flemming - Fleming was a scottish bacteriologist and nobel prize winner, best known for his discovery of

Alexander Grothendieck - . by: mijha williams. april 26 2011 mrs. naghad 4 th. biographical data. he was born in the