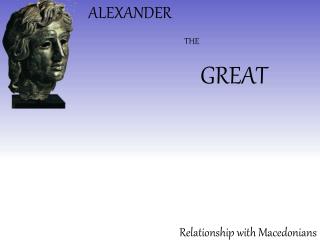 ALEXANDER. THE. GREAT. Relationship with Macedonians. The Policy of Fusion. Alexander - . the so so. born 356 bc dies 323 bc born in macedon, son of king philip ii someone assassinates philip ii

Alexander - . by sam raphael. what is alexander about?. the life story of alexander the great the reflection of alexander

ALEXANDER - . the. great. theme 1: relationship with greeks. the league of corinth. homework tonight use your existing

Alexander Flemming - Fleming was a scottish bacteriologist and nobel prize winner, best known for his discovery of

Alexander Grothendieck - . by: mijha williams. april 26 2011 mrs. naghad 4 th. biographical data. he was born in the