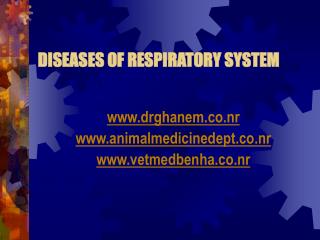 Diseases of Respiratory System : - . general objective. by the end of this session each student should understand the

Chapter 22 Respiratory System - . respiration ventilation of lungs exchange of gases between air and blood blood and

Respiratory Physiology Part III Respiratory Distress Syndrome, Transient Tachypnea of the Newborn, and Other Causes of