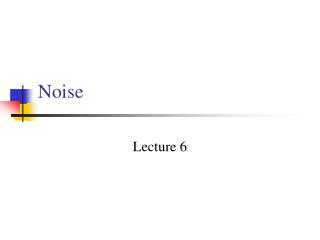 NOISE - Images provided by tristan… noise noise refers to the residual low level sound that is heard in quiet periods.

NOISE - . noise is the undesirable portion of an electrical signal that interferes with the intelligence. why is it

Noise - What is noise? a definition: any unwanted signal obscuring signal to be observed two main origins

Noise - . what you should know. bwf health &amp; safety hero campaign. noise - what are the campaign objectives.

NOISE - . “unnecessary noise, then, is the most cruel absence of care which can be inflicted either on sick or

How the Grinch Stole Testing Noise, Noise, Noise! - . gotowebinar housekeeping. your participation. open and hide your