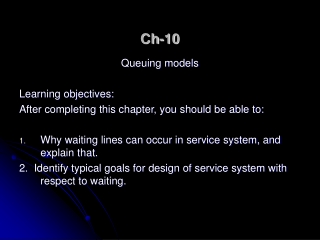 Ch-10. Queuing models Learning objectives: After completing this chapter, you should be able to: Why waiting lines can occur in service system, and explain that. 2. Identify typical goals for design of service system with respect to waiting. Summary