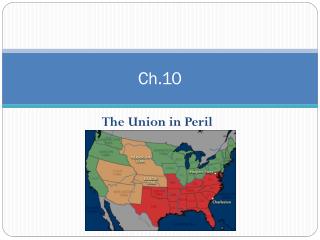 Ch.10. The Union in Peril. Bell Ringer. What major issues have we discussed so far this semester? Why do you think manifest destiny will lead to further issues between the North and the South?. Conflict over Status of Territories. 3 Conflicting Positions