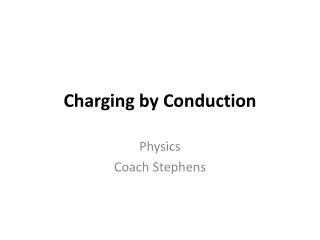 Charging by Conduction and Induction - . note: it is not necessary to copy all the details of all the examples. charging

Charging by Contact 2: CONDUCTION - . name two ways that objects can receive an electric charge. describe how a material

Charging by Induction - . when an object is connected to a conducting wire or pipe buried in the earth, it is said to be

Charging By Friction - . when two objects are rubbed together, the molecules are close enough together that the

Charging by Contact - . hat hair and clingy cloths from the dryer are two everyday examples of static electricity. the

Conduction - Transfer of heat heat is a form of energy. it always flows from one place to another, that is from hot to