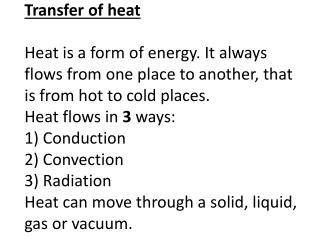 Transfer of heat Heat is a form of energy. It always flows from one place to another, that is from hot to cold places. Heat flows in 3 ways: 1 ) Conduction 2 ) Convection 3 ) Radiation Heat can move through a solid, liquid, gas or vacuum. Conduction. Synaptic Conduction - . what happens when an action potential reaches the axon terminals? depends on the nature of

Heat Conduction - . in the intro to heat transfer, the conductive heat transfer was presented as: however, this is true

THERMAL CONDUCTION - . definition of thermal conduction. this is how heat energy flows from a hot to cold region of a