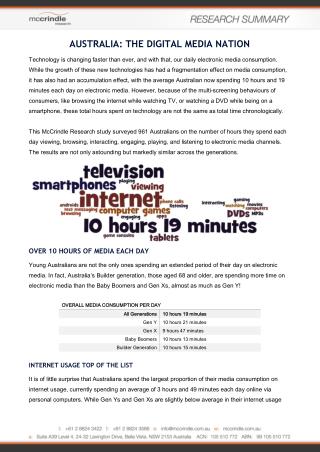 While over 10 hours of media consumption per day might seem like an incredibly long period of time, social researcher Mark McCrindle in this live radio interview, explains that it is not, in fact, almost an entire day.


Chronologically the time is in fact more like 7 hours, created by multiscreening behaviours. Australians might spend time on their smartphone while watching TV, or answer phone calls while browsing the internet.

Mark also explains that Australians don’t segment their time – that is why Australians have the ability to package such a large number of digital media hours each day. We don’t plan on setting aside 7 hours per day on digital media, but might use social networking at lunchtime or browse the web sporadically throughout the day. Timeshifting and multitasking are adding to our digital media hours of consumption.

Mark delves into the differences in findings across the generations from the McCrindle Research report. Older generations tend to prefer the TV, while the younger generations prefer online browsing via PCs and their smartphones.

While there are a number of benefits with the range of digital media channels available, Australians also seem to be addicted to digital media consumption – people can lose time for reflection and forward planning, and a hyper-drive pace of life can be created which can interfere with sleep and normal patterns of life.

Mark comments on the changing face of media including the fragmentation of digital mediums – while broadcast media has struggled as individuals move to new platforms, viewers are being empowered to interact with programs at a whole new level – tweeting while watching television or reposting news articles to social media platforms. Digital Nation - . preliminary discussion questions. how much time do you spend online per week? what do you spend your

Australia as a Nation! - . by yours and truly m illie. why did a ustralia become a nation? the premier of n ew s outh