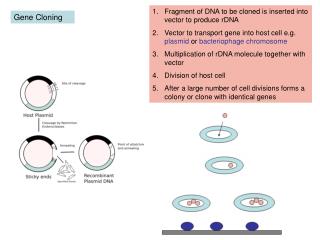 Fragment of DNA to be cloned is inserted into vector to produce rDNA Vector to transport gene into host cell e.g. plasmid or bacteriophage chromosome Multiplication of rDNA molecule together with vector Division of host cell Gene Cloning - . - techniques -ethics -uses -consequences. what does the term cloning mean? what is gene cloning? why is

Gene Cloning - Cloning - a definition. from the greek - klon, a twigan aggregate of the asexually produced progeny of an

Gene Cloning - . learning objectives i can…. explain how plasmids are used in gene cloning. explain how restriction

Viral Gene Cloning - . phages can “hijack” bacterial replication machinery and clone a gene through self replication.

Cloning of a PCR Amplified Gene - . ppt 2. about plasmids. the plasmid puc19 used for this experiment is derived from

Cloning Cloning - . dolly, or ewe-2, an ethical problem. cloning presents a moral issue that must be studied from the