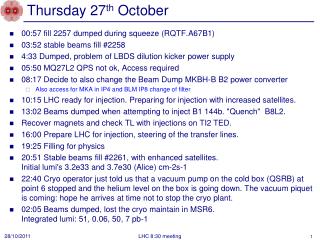 Thursday, October 27 th - . warm up. please take out your homework and complete warm up did you write down your

Thursday, March 27 th - . which of the following inventions do you feel has had the greatest impact on society? why?

Thursday , October 4 th - . get out your “winter dreams” character chart and a scrap piece of paper. put your name at

Thursday, October 4 th ! - . objective: identify, explain and give examples of each plot element.

Thursday October 17 th - . aim : how can we be best prepared for tomorrow’s unit 2 exam on factoring polynomials ? the

Thursday October 28 th - . please have your homework out so i can stamp it before class starts!. agenda : homework

Thursday 27 October Topic: Blood!!! - . do now : what do you already know about blood? think about: where is it in the