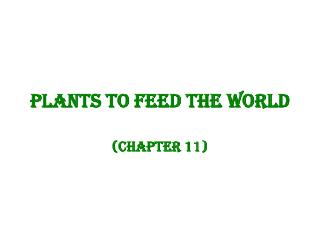 Habitats for Plants and Animals by Denise Carroll - . what is an environment?. plants and animals live together in many

Who Will Feed China? Wake-up Call for a Small Planet - . lester brown’s look at the future of china and the world.

Plants: Roots, Stems, Leaves - . students will be able to describe the aspects of roots, stems, and leaves and their

How do you use plants? - . since plants are so familiar, we may overlook how vital they are to human life:. how you use

Topic 2 The World of Plants - . standard grade biology. world of plants is divided into: a- introducing plants b- growing

Medicinal Plants - . the whole medicine. how many are used?. 75% of the world population depends on traditional herbal

What is botany? - . the scientific study of plants. what is a plant?. what distinguishes a plant from other forms of

15.1 – Feeding the World - . objectives. identify the major causes of malnutrition. compare the environmental costs of