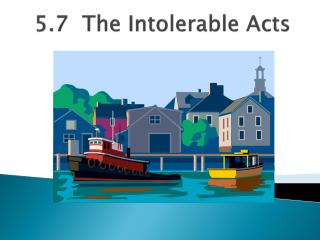 5.7 The Intolerable Acts. Britain’s Frustration. The Boston Tea Party did not go over very well with the British. This time the colonists had gone too far!. “We must master them totally,” King George III declared. “or leave them to themselves.”.

Acts Chapter 11 - . further expansion of the church to the gentiles. acts 11:1-18: peter explains to the apostle

6-3 - . intolerable acts- passed after the boston tea party. closed down boston harbor until payment for tea was made

Word Splash - . use all of the following words in one sentence. guard post technical block. word splash. french and

The Road to the Revolutionary War - . review. french and indian war? how did they pay for it? proclamation of 1763? stamp

6.4 New Taxes and Tensions - . goals: how did colonists respond to the townshend acts? why were the boston massacre and

Hear Ye! Hear Ye! Taxation without Representation - . whereas the following acts were passed upon us without our

The Road to Revolution - . 6-3: the road to lexington and concord. the intolerable acts. militia –. armed citizens who

Journal 3/2 - . look back at the compromises made during the constitutional convention. predict what kind of arguments