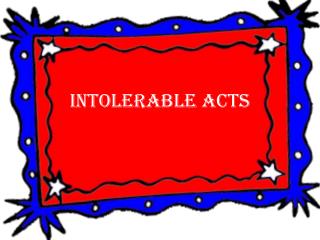 The Intolerable Acts - . taylor johnston hensey fenton blake estridge. why did it

5.7 The Intolerable Acts - . britain’s frustration. the boston tea party did not go over very well with the british.

Boston Tea Party/Intolerable Acts - . warm up question: 10/15/13. write down one thing you learned about the british east

The Intolerable Acts - . proclamation of 1763. no settlement west of appalachians why? british—avoid war with indians

Revolutionary Acts - . chapter 6.1 tighter british control. when the addition of the school is finished, you will not be

Navigation Acts - . no country could trade with the colonies unless the goods were shipped in either colonial or english

Acts Series - Power 120. acts series. the kingdom strikes back! it almost sounds like a title for a star wars movie. but,

Acts 6 - 1 now in those days, when the number of the disciples was multiplying, there arose a murmuring against the

Health Acts - . aiesha and gareth. mental capacity act. applies to? when is a patient deemed to lack capacity? guiding