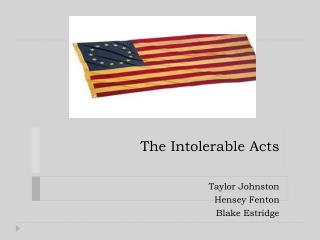 The Intolerable Acts. Taylor Johnston Hensey Fenton Blake Estridge. Why did it happen?.

The Morrill Acts - . an act passed by the congress for western states it helped westerners establish colleges.

The Townshend Acts - . don’t tread on me part ii. within a year after parliament repealed the stamp act, charles

5.7 The Intolerable Acts - . britain’s frustration. the boston tea party did not go over very well with the british.

Boston Tea Party/Intolerable Acts - . warm up question: 10/15/13. write down one thing you learned about the british east

The Intolerable Acts - . proclamation of 1763. no settlement west of appalachians why? british—avoid war with indians

The Acts of the Apostles Acts 16 - Four Witnesses - . timotheos of lystra. lydia of thyatira. adelphee , the philippian

Intolerable Acts - . let’s think back…. last event we discussed? boston tea party how do you think the british felt

The Acts . - By the group of: tyler dawson, marquese hayes, chris reid, connor nichols. the acts . an act of the british

THE ACTS - . what you need to know about mbta, bgepa, &amp; esa. migratory bird treaty act. congress needed to

The Townshend Acts - . bringing britain and the colonies closer to war. review:. write down 2 important facts about the

Acts - . the new testament book that tells the result of the incarnation of jesus. the acts of the apostles. some of the