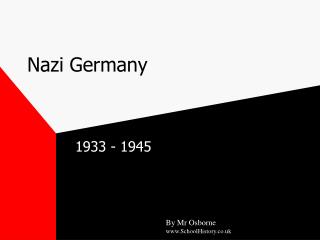 Nazi Germany . 1933 - 1945. By Mr Osborne www.SchoolHistory.co.uk. The use of Terror. The SS an elite group of committed Nazis, used to eliminate the SA in June 1934 charged with internal security guarded concentration camps hunted political enemies commanded by Heinrich Himmler.