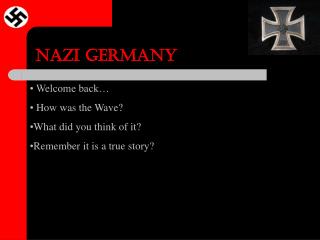 Nazi Germany. Welcome back… How was the Wave? What did you think of it? Remember it is a true story?. Review. What events led to the rise Hitler in Nazi Germany. What were the Nuremberg Race Laws? What was Kristalnacht. Housekeeping. You will have a Quiz on Friday.