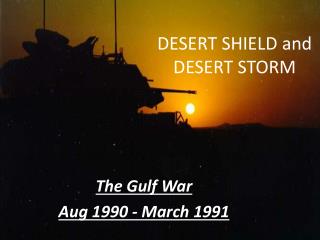 Desert Storm - . the ups and downs of a tortured people. welcome to the world!!!. though promised independence for aiding

Investigation of „Desert Storm“ - . a question of do or don‘t. international application analysis association

DESERT - . the desert usually does not get much rain fall . by shelby and jack. location. the yellow is the deserts. the

desert - Lexx.a.smith. desert. characteristics. when you think of deserts do you think of a dry hot endless sea of sand