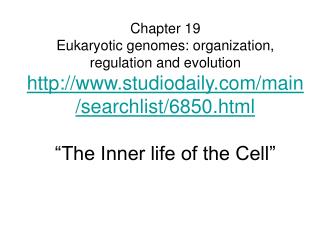 Chapter 19 Eukaryotic genomes: organization, regulation and evolution http://www.studiodaily.com/main/searchlist/6850.html “The Inner life of the Cell”. Gene expression…. Is altered in response to environmental changes, both internal and external Is influenced by the structure of chromatin