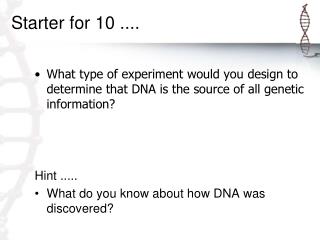 Starter for 10. What type of experiment would you design to determine that DNA is the source of all genetic information? Hint ..... What do you know about how DNA was discovered?. Higher Human Biology Unit 1 – Human Cells DNA. Learning Outcomes. Content Starter for 10… - . in your books, li st the characters we have met so far. what are they like? use 3 adjectives to

A starter for 10! - . test your knowledge!. everybody up!. yes up on your feet!. put your hands on your head if you

A starter for 10! - . test your knowledge!. everybody up!. yes up on your feet!. put your hands on your head if you think

Starter for Tuesday 10-15-13 - . all of these procedures must be followed when using the setup shown below except — a

Science Starter 10/9 - Science starter 10/8 identify the criteria &amp; constraints for our new question. write it in

Science Starter 4/10 - . true or false ice wedging only occurs in winter. the layers of soil are called horizons. the

Starter 10-29-13 - . the anatomy of grasshoppers is being studied in a dissection lab. working in groups of three,

10/5-6 Starter - . a neutral atom contains 34 electrons and has an a of 59. write the nuclear symbol notation and hyphen

Starter for five - . what is meant by the ‘density’ of a substance? what units are used when measuring the density of