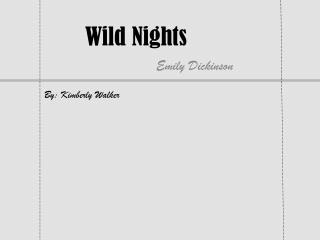 Wild Wild Guns - . where the cowboys at. 1874 smith &amp; wesson revolver. this gun a louse 6 signal shots at a time

Wild, Wild West - . westward expansion miss duean black. eq: what were the major expeditions that played a role in

Tokyo nights - Life after dark in the japanese

Better Nights - Https://www.betternights.nl/ better nights is the online store for all your down filled blankets and

Arabian Nights - Are held on first and last monday of every month. our arabian nights are filled with entertainment