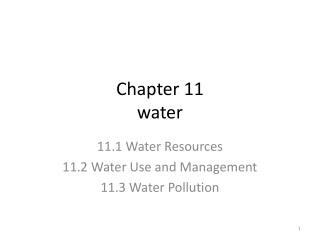 Chapter 11: Water - . section 1: water resources. some of the water we drink today has been around since water formed

Chapter 11: Water and Environment - . big question: can we maintain our water resources for future generations?. water. a

Chapter 11: Water and Aqueous Systems - . water and its properties. water in the liquid state the atoms in water are

Unit 11: Water - . unit 11: water. drinking. flushing toilets. washing ourselves. what do we use water for?. swimming.