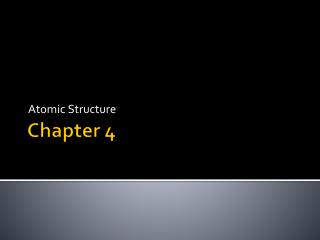 Atomic Structure. Chapter 4. Section 1. Defining the Atom. Section 1 – Learning Targets. 4.1.1 – I can describe Democritus’ ideas about atoms. 4.1.2 – I can explain Dalton’s atomic theory. 4.1.3 – I can identify what instrument is used to observe individual atoms. Early Models of the Atom.