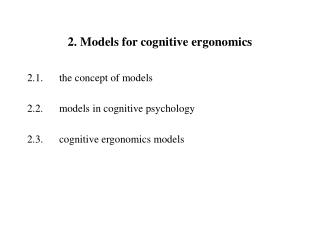 Cognitive Models - . agenda who am i? cognitive models situated action activity theory distributed cognition how to use

Descriptive Cognitive Models - . rodin once said that carving a sculpture was easy, all you had to do was take a block of

Spearman and the Cognitive Ergonomics of Health Disparities - . linda s. gottfredson , school of education, university of

Ergonomics - . mazie fairchild 11-18-05. ergonomics. what is it? ergonomics contributes to the design of tasks, jobs,