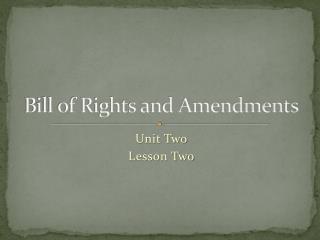 Bill of Rights and Amendments Bill of Rights and Amendments. Unit Two Lesson Two. Vocabulary. Amendment: A change or addition to a document Due Process of Law: The idea that all people will be treated equal under the law Abolish: To end. Amendment I. Freedom of press, religion, speech, and to assembly peacefully

Bill of Rights and Amendments

Branches - . checks and balances. articles of confederation. constitution. bill of rights. anything goes. $100. $100.

Civil Liberites and Public Policy - . how the bill of rights has been interpreted and incorporated. the incorporation of

Civil Liberites and Public Policy - . how the bill of rights has been interpreted and incorporated. the incorporation of

Unit 3: Constitution Test - . mr. young 1 st and 6 th period. this section of the constitution states why it was written,