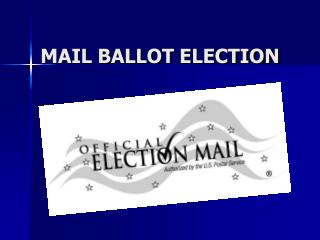 MAIL BALLOT ELECTION. How Vote by Mail Works. Step 1 - The voter receives their ballot in the mail approximately 2 weeks before Election Day. Step 2. The voter fills out the ballot in the comfort of their own home, office or other place of their choosing. Step 3. Ballot Initiatives - . ccsc constitutional review. a ballot initiative is a policy proposal decided by plebiscite once a

Ballot Test - . the race is close on the initial ballot. heller has stronger intensity of support. “while i know it is

2014 Election Ballot Bond Question #3B For the Elizabeth School District Explained - . what is bonded indebtedness?.