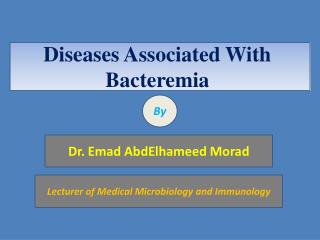 Associated Ocular Syndromes and Diseases - . “i have no relevant financial relationships with the manufactures(s) of

Bacteremia and Sepsis - . gülden Çelik. learning objectives at the end of this lecture, the student should be able

Endocarditis and Bacteremia: - . endocarditis  is an  inflammation  of the inner layer of the heart, the