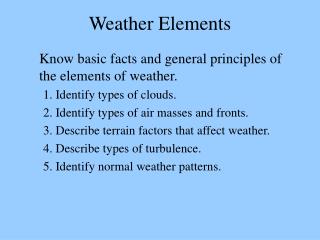 Weather - . what is weather?. refers to the state of the atmosphere at a specific time and place. the one thing that you

Weather and Its Idioms - . today, we're going to talk about the weather. . weather. what are the four seasons? which

Weather - . wind power wind farms. 19.1. weather. weather is the condition of earth’s atmosphere at any given time and

Weather Vs. Climate - . weather : atmospheric conditions in a particular location over a short period of time (a day to a

Atmosphere and weather - . 6th. what are the main elements that make up our atmosphere? if there is not much carbon

Weather—Understanding it - . weather. why is it so important to understand the weather?. weather. is the atmospheric

Weather - . we will cover. wind weather forecast weather chart the passage of a depression sample weather charts. why be

“Weather”… You Like it or Not - . a weather unit introduction. what do you think about, when you hear the word