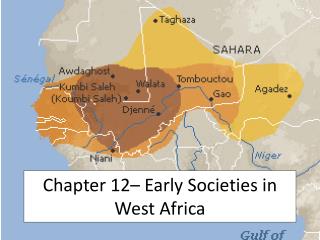 Chapter 12– Early Societies in West Africa. 12.2 Geography and Trade. The northern border of West Africa is the Sahara Desert The Atlantic Ocean makes up the western and southern borders The eastern edge is made up of mountains. Compromise and Conflict in the early 19 th century (early 1800s) - . what compromise drew an east-west line through

Colonial Slavery, the Great Awakening and the Enlightenment APUSH Unit One - . the triangular trade. new england

Agricultural Societies Chapter 14 From Egalitarianism to Kleptocracy The evolution of Government and Religion - . text

Chapter 10 Kinship and Descent - . chapter questions. why is kinship so important in nonstate societies? can you explain

Chapter two - . early societies in southwest asia and early african societies. i- the quest for order. a. mesopotamia: