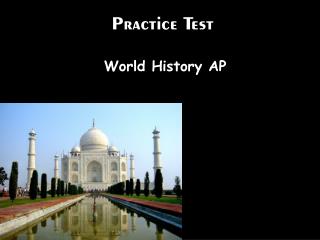 Practice Test. World History AP. Which of the following is true of both Mesopotamia and Egypt?. Both were organized into city-states. Both were ruled by a military dictatorship. In both, writing systems were used. Both had monotheistic belief systems. Mummification was important in both. Civil War I Have Review - . how to play:. each slide will have a question that begins with “who has…..” click on

Practice Test - . world history ap #8. most of the earliest civilizations developed in . areas around the mediterranean

DRIVING TEST PRACTICE - . you will select the letter that matches your answer to the question. click with the mouse to

PSAE ACT Practice Test IIII ACT- 55C -SAMPLE - . pi 1. according to the information in the passage, a sample of marble