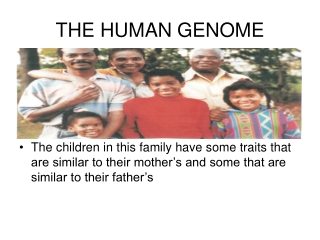 Thread of L ife - . tl1 - the human genome project. a genome is all the genetic material contained in the chromosomes of

Review from last time - . while the lecture primarily dealt with the human genome, other genomes have different

13.3- The Human Genome - . what is a genome?. genome: the total number of genes in an individual. human genome- approx.

Beyond the Human Genome Project - . future goals and projects based on findings from the hgp. hgp goals. identify all the

SNPs and the Human Genome - . sorin istrail. single nucleotide polymorphism (snp). the most abundant type of