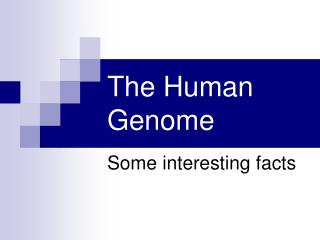 The Human Genome. Some interesting facts. Biological system overview. Genes have variability, which causes a phenotype. Proteins and RNAs interact in pathways and networks ~8 interactions pp. Genes need to be expressed at the right time in the right place ~ 5k – 10k genes per tissue. GENERAL VIEW OF THE HUMAN GENOME - . gene landscape. in prokaryotes, genes are often tandemly arranged, with little or no

Overview: The DNA Toolbox - . sequencing of the human genome was completed by 2007 dna sequencing has depended on

Chapter 21 - . genomes and their evolution. overview: reading the leaves from the tree of life. complete genome sequences