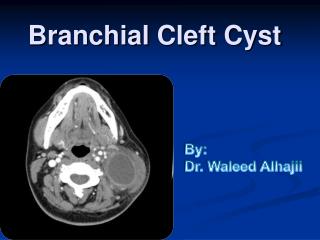 Branchial Cleft Cyst. By : Dr. Waleed Alhajii. What is a Branchial Cyst?. Definition: Congenital epithelial cysts , which arise on the lateral part of the neck due to failure of obliteration of the second branchial cleft in embryonic development. . Cleft Lip and Cleft Palate - . by: ashley dixon. causes. during the early stages of pregnancy, the upper lip and palate

Sebaceous Cyst - Http://www.healthwhoop.com/sebaceous-cyst/ sebaceous cyst is a minor, closed pouch under the skin that

Pilonidal Cyst - A pilonidal cyst is a development variation from the norm that happens at the base of the back , which