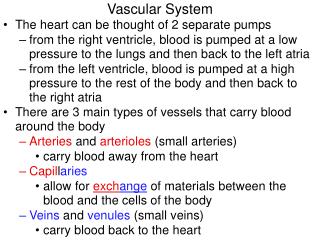 Vascular System - . learning objectives. to describe the components of the vascular system. to understand the structure

Peripheral Vascular System - . consists of a system of intertwining veins and arteries which carry blood to and from the

Cardio-vascular system - . outline. 1- overview 2- path of blood through the heart and vasculature 3- anatomy of the

REVIEW VASCULAR SYSTEM - . answer the following questions. what are the 4 components of blood? what are the 5 types of

CARDIO-VASCULAR SYSTEM - . circulatory system. circulation – pumping of blood through the entire body by the heart.

Cardio-vascular System - . challenge ?. name a mechanical system (other than the cv system) that requires a pump and

Ch. 13 Vascular System - . general purpose of the vascular system: * the exchange of materials between blood and