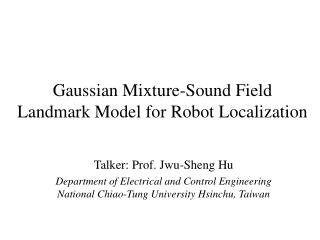 Gaussian Mixture Model - . mixture modeling. a formalism for modeling a probability density function as a sum of

Particle Filter for Robot Localization - . vuk malbasa. problem. map is given as bitmap it is possible to measure

Gaussian Mixture Models and Expectation Maximization - . the problem. you have data that you believe is drawn from n