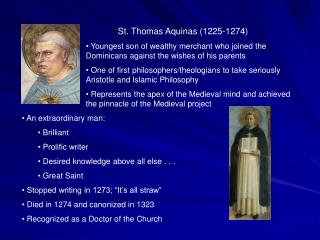 St. Thomas Aquinas (1225-1274) Youngest son of wealthy merchant who joined the Dominicans against the wishes of his parents One of first philosophers/theologians to take seriously Aristotle and Islamic Philosophy Aquinas’ Proofs - . the five ways. thomas aquinas (1225-1274) . joined dominican order against the wishes of his family