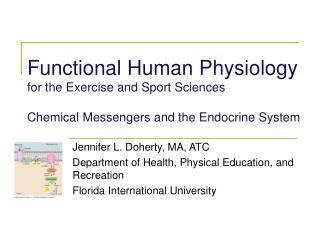 Chapter 7: Exercise Physiology and Fitness - . what is exercise physiology? what is the role of physical activity and

Endocrine System - . hormone is a chemical messenger secreted by one endocrine gland or cell into the bloodstream and

Chapter 10 - Human anatomy &amp; physiology i. overview of the nervous system. chapter 10. organization of the

The Endocrine System - . chapter 18. function of the endocrine system . maintain homeostatic balance of the body