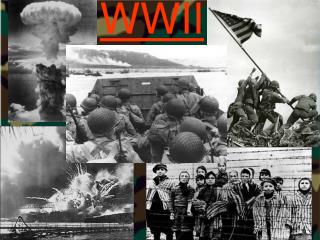 WWII - . world war 2! brainpop. germany had lost world war i. like the united states, germany’s economy in the 1930’s

WWII - . the history that led up to u.s. involvement. listen and “doodle” what you hear. on worksheet, make some

WWII - . the war to end all wars. what do you know?. make a list of everything you know about wwii. wwii preview.

WWII - . don’t forget: you can copy-paste this slide into other presentations, and move or resize the poll.

WWII - . what caused wwii in europe?. revenge: germany wanted revenge for everything lost in the treaty of versailles at

WWII - . the rise of hitler. bell work. you need your textbook today!  what comes to mind when you think of wwii? try

WWII - . internment in america. what is

WWII - . killed 3% of 1940’s world pop. 60 million people most of the fighting and dying took place in eastern china

WWII - . the entrance of the soviet union to ve day. hitler’s operation barbarosa. before the us entry (june, 1941),