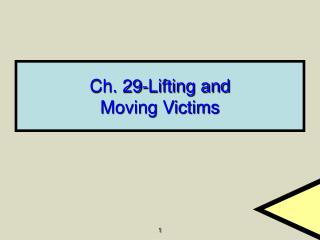 Ch. 29-Lifting and Moving Victims. General Principles of Moving. If you find a victim in a facedown position, move the person to an assessment position after doing the ABCD assessment and checking for possible neck and spinal injury Lifting and Moving - . role of the emr. sometimes a victim must be rescued from a dangerous situation before care can be

Moving Victims - . general principles. moving victims. a victim should not be moved until he or she is ready for

Moving And Rescuing Victims - . emergency moves. pull victim in direction of long axis tug on clothing in the neck and

Lifting and Moving Patients - . chapter 6. moving and positioning the patient. take care to avoid injury whenever a

Ch.29--Astronomy - . the astronomical unit. a convenient unit of distance measurement within the solar system. miles /

Ch 29 Introduction - . bacteria and archaea form two of the three largest branches on the tree of life. the third