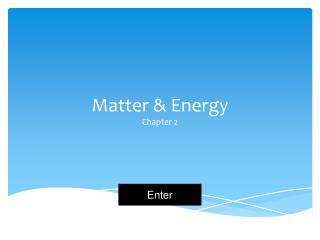 Matter & Energy. Chapter 2. Enter. What are Matter and Energy?. Joule. 4.184 joules = 1 calorie. matter – is material such as rocks, water, air with mass and occupying space. energy – is what makes matter move! Energy is measured in many different units. Oxidation to Release… - Cellular respiration. oxidation to release…. energy. matter is recycled energy is not

Chapter 1 - . introduction: some basic concepts. welcome to the world of chemistry. chemistry. the study of matter –