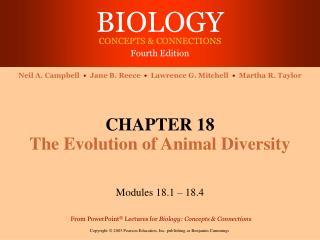 CHAPTER 18 The Evolution of Animal Diversity CHAPTER 18 The Evolution of Animal Diversity. Modules 18.1 – 18.4. What Am I?. Of some 1.5 million species of organisms known to science, over two-thirds are animals Humans have a long history of studying animal diversity But do we always know what an animal is when we see one?.

CHAPTER 18 The Evolution of Animal Diversity

The Reproductive System Chapter 17 - . introduction. the reproductive system seeks to ensure the survival of the species.

Chapter 2 - . antibody structure and the generation of b-cell diversity. the structural basis of antibody diversity.

Which of the following did NOT occur during the Cambrian Explosion? - . animals acquired specialized cells, tissues, and

INTRODUCTION TO ANIMAL DIVERSITY - . chapter 32 our kingdom we are animals. animals are. species-rich morphologically