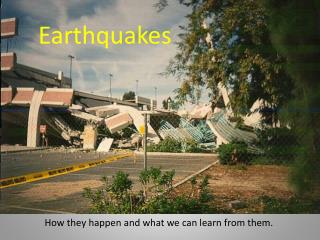 Earthquakes. How they happen and what we can learn from them. What causes most earthquakes on Earth?. 1) Stress  pressure is applied to sections of rock in different directions 2) Strain  rocks deform from their original shape 3) Fracture  rocks break Chapter 6 Restless Earth: Earthquakes, Geologic Structures, and Mountain Building - . what is an earthquake?. an

Where Do Large Earthquakes Occur in the Eastern United States? or Reflections on the - Holy grail of earthquake