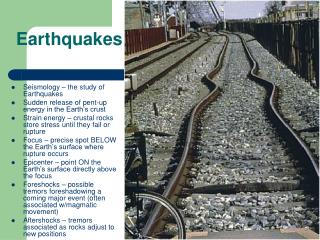 Earthquakes. Seismology – the study of Earthquakes Sudden release of pent-up energy in the Earth’s crust Strain energy – crustal rocks store stress until they fail or rupture Focus – precise spot BELOW the Earth’s surface where rupture occurs 2010 Dynamic Planet: Earthquakes and Volcanoes - . presented by linder winter. use of this powerpoint presentation. all

Independence Middle School Science MAP Prep - . the rock type that would contain fossils would be?. metamorphic.

Y10 Earthquakes - . geological processes. meulaboh – the epicentre. earthquake video. what is an earthquake? what